A significant percentage of veterans returning from wars exhibit symptoms of posttraumatic stress (PTS). This is now recognized as a serious health problem, but what about the victims of such violence? Refugees live with the constant reminder of what war has done to their lives and those of their families.

A randomized/matched study published in the April 2013 issue of Journal of Traumatic Stress (Volume 26, Issue 2, pp. 295-298.) measured the severity of posttraumatic stress symptoms in refugees in Africa before and after learning the Transcendental Meditation (TM) technique. The reductions were dramatic. 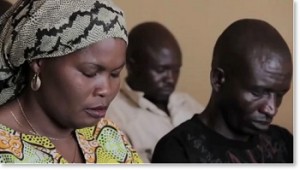 Forty-two refugees from the Congolese civil war, living in Uganda, were assigned to learn TM immediately or wait until after the study. The participants were matched on age, gender and severity of posttraumatic stress symptoms at baseline. All participants were given the Post-Traumatic Stress Disorder Checklist (PCL) at baseline, and 30-day and 135-day after learning TM.

PCL scores in the control group trended upward from baseline to the two posttests. In contrast, PCL scores in the TM group went from high at baseline, indicating severe PTS symptoms, to a non-symptomatic level after 30-days TM practice, and remained low at 135-days.

“We anticipated improvement, but I didn’t expect this magnitude of change,” said lead author Colonel Brian Rees MD, MPH. “The continued improvement at four months also led us to conclude that TM may be a very worthwhile intervention for anyone suffering from posttraumatic stress.” 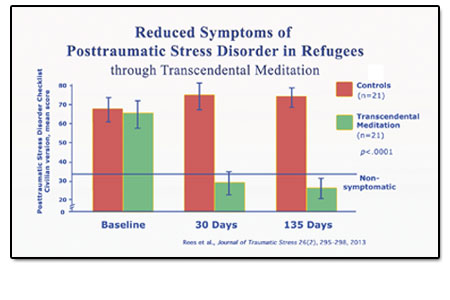 This graph shows the changes in PTS symptoms in the two groups. A drop in 11 points on this measure is considered clinically significant-visible improvements can be seen. TM practice led to three times the drop in posttraumatic stress symptoms after 30 days practice.

“I was surprised to see how quickly TM practice had an effect on posttraumatic stress symptoms in these refugees, who had no home, no job, and very little support from their environment,” said co-author Fred Travis, Ph.D., Director for the Center for Brain, Consciousness, and Cognition at Maharishi University of Management. “These findings suggest that TM may be an effective antidote to the rising incidence of PTS in the world.”

A person with posttraumatic stress may be hyper-vigilant, sleep poorly, distrust others, have memory problems, and have difficulty making decisions and following through. Traumatized populations are challenged both by outer circumstances and by inner conditions to help themselves. Thus, posttraumatic stress symptoms are resistant to change by usual therapy.

Three-months practice of TM was also reported to decrease anxiety, depression, and posttraumatic stress symptoms in veterans from Iraq and Afghanistan.

Findings from these studies support the efficacy of TM practice for reducing posttraumatic stress symptoms. Large-scale studies assessing both quantitative and qualitative measures are warranted to investigate the effects of TM on reducing behavioral, psychological and physiological symptoms resulting from traumatic experiences across cultures.