AN INITIATIVE TO PROMOTE NATIONAL STABILITY IN MOZAMBIQUE

The scientifically-verified effectiveness of the program at the basis of the Global Peace Initiative—Transcendental Meditation and TM-Sidhi program—in resolving military conflicts and other problems on a national scale has prompted governments to implement these programs for the benefit of their countries.

The general policy of government and implementing agencies is to respect the privacy of these governmental projects . In the case of the Republic of Mozambique, however, President Alberto Joachim Chissano during his time of his presidency and the government of Mozambique came forward to publicly announce the great benefits that their nation had experienced from the adoption of the advanced meditation programs that form the basis of the Global Peace Initiative. In particular, President Chissano expressed his willingness to endorse his experiences to any government or head of state who inquires.

The following is an excerpt of a report presented by Lieutenant General Tobias Dai, Former Commander of the Armed Forces of the Republic of Mozambique, who was in charge of implementing this peace-building program into the Armed Forces. The program used in Mozambique, like the core program used by the peace professionals of the Global Peace Initiative, employed the Transcendental Meditation and TM-Sidhi Program, which includes the group practice of a technique called Yogic Flying.

His presentation, given at the 1994 International Conference on Invincible Defense at Maharishi Vedic University, Holland, reported on the positive, comprehensive transformation in the nation brought about by this program.

Lt. Gen. Tobias Dai, Former Commander of the Armed Forced of the Republic of Mozambique 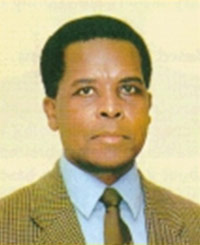 “Mozambique, after a disturbed period of war during the past 16 years, signed a General Peace Agreement in Rome in October 1992. The damage in terms of human life and material property was very high, and the country remained in a very precarious situation.

“After the signing of the General Peace Agreement, there was still a long way to go before the general elections could be held in the country. Uncertainty about the success of the implementation of the General Peace Agreement, and questions about the ability to maintain peace until the elections, shadowed the first happiness in the hearts of the Mozambicans following the signing of the peace agreement. The proposed future UNO mission also was not a guarantee of the maintenance of peace—as has been seen in many countries in the world.

“It was at this time that we were contacted by the representatives of Maharishi Vedic University who gave a detailed exposition of their technologies and their effects…. After serious and critical study of the technologies that were being offered, the Joint Chiefs of Staff of the Armed Forces of Mozambique were charged with analyzing and studying the possibilities of its implementation in the Armed Forces.

“After having completed a thorough evaluation of the proposal, the Joint Chiefs of Staff decided to implement the Transcendental Meditation and TM-Sidhi Programme, including Yogic Flying, in the Armed Forces of Mozambique with the aim to create the Maharishi Effect in our country. It was a matter of decision. Either to try it or to leave it aside. Our decision was to try. This occurred before the arrival of the UNO forces in Mozambique.

“Thus started the huge work of teaching Transcendental Meditation in the different military units of the country, involving the Ground, Naval, and Air Forces. During the year 1993, about 15,000 people were taught in the provinces of Maputo, Sofala, Manica, Zambezia, Nampula, Niassa, and Cabo Delgado, and in 1994, 1,000 more were taught. Also, schools of police training, pertaining to the Ministry of Home Affairs, began the program. In all, more than 3,000 people were trained in the TM-Sidhi Program…

“The results of the Maharishi Effect were predicted prior to the implementation of the program. We were told that the increase of coherence in the collective consciousness created by the Maharishi Effect was going to maintain the peace, bring improvements in the crime index, decrease the number of car accidents, and bring an unprecedented improvement of the economy…. 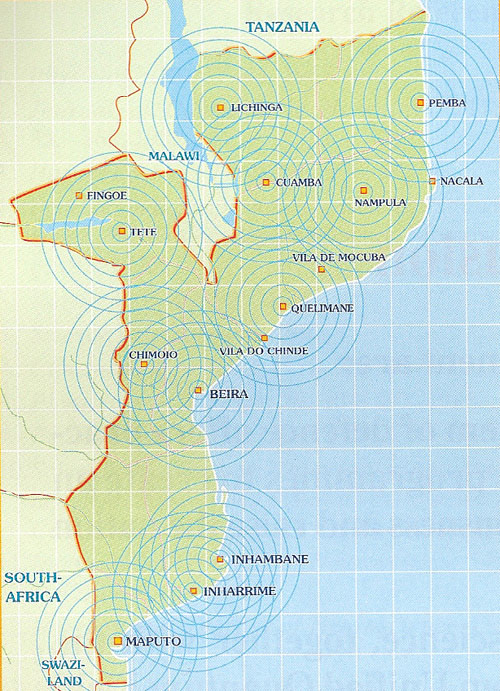 Waves of coherence—the Maharishi Effect—radiating throughout Mozambique generated by groups of military practitioners of Maharishi’s Transcendental Meditation and Yogic Flying.

“When thousands of people were taught in Maputo, it was possible to assess a decrease of 20% in the crime index during the first quarter of 1993. This situation was totally anomalous, because, at the end of the war, an increase of crime would be expected. The same thing happened in the city of Quelimane (decrease of 20%) and the province of Manica. Again, when the troops stopped practising due to the troop movements and to the demobilization of the troops, the crime indexes increased again. During the year 1993, the number of cars in the country increased by approximately 3-4 times and the circulation of these vehicles in the country increased dramatically. For the first time in 28 years, it was possible to travel by road freely all around the country. In spite of this, the number of car accidents remained practically the same as in the previous year and the number of deaths due to car accidents decreased compared to 1992. During 1993, an economic growth of 6% was expected, but in fact growth was 19%—completely unexpected…

“Until now, although with several difficulties, the maintenance of peace has been possible during these 2 years, and that free and just elections have been carried out—the only successful UNO mission in the world.

“Our conclusion is that the implementation of TM-Sidhi Programme, with Yogic Flying, into the Armed Forces of Mozambique was worth the effort and that the results were in line with what was predicted….”

Although the large groups of TM-Sidhi program Yogic Flyers in Mozambique were substantially reduced in 1994, as indicated in Lt. Gen. Dai’s speech, smaller groups of Yogic Flyers have continued to create an influence of coherence in the country.

Analysing the Unique Transformation in Mozambique

These changes in Mozambique are in striking contrast to the developments in a similar country, Angola, during the same time period. This comparison makes clear that the progress that Mozambique continues to experience is not a general phenomenon in the region.

Both Angola and Mozambique are former Portuguese colonies; both countries suffered long and severe civil wars in the 1970′s and 1980′s. In the early 1990′s both countries signed peace treaties that were subsequently monitored by the United Nations. (A peace accord in Angola lasted from May 1991 to October 1992, but then collapsed again into civil war until a new accord was reached in November 1994.)

In spite of the peace treaty and the presence of United Nations security forces, violence and disorder have continued to be serious problems in Angola. For example, heavy fighting in 1997 threatened the 1994 peace treaty, while the economy of Angola has continued in disarray.

In contrast, Mozambique implemented Maharishi’s program for defense soon after its 1992 agreement. As a consequence, violence and disorder in Mozambique were drastically reduced; at the same time, the country’s economy began to recover and has shown solid economic growth ever since. Today Mozambique is considered the model for how an African country can recover from severe civil war.